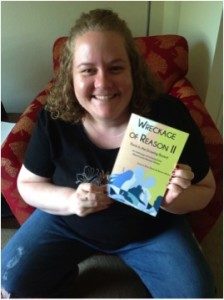 Melanie Page is the author of “Metal Eye Drifter,” a short story included in WORII: Back to the Drawing Board, An Anthology of Contemporary XXperimental Women Writers, edited by Nava Renek and Natalie Nuzzo. Her short fiction also appears in Paper Darts Volume 5, Necessary Fiction, and Corium Magazine.

Melanie is a graduate of the Notre Dame MFA program. She runs Grab the Lapels  and collaborates with authors to create unique posts for virtual book tours.

“Metal Eye Drifter” is about rock n roll, at one level at least, and if you know me, you know I love this topic. In my job as Senior Editor at the creative non-fiction literary magazine Under the Gum Tree, I take a special interest in the department we call “Soundtrack,” and I love to work with the writers in this category to get to the bottom of the stories they want to tell.  This is one of the reasons I was so excited to interview Melanie Page about her writing.

The way things go in May, of course, what with the culminating projects in academia and parenting responsibilities climaxing, etc., I never got around to meeting Melanie face to face over Google Chat or Skype as we planned on doing. But nevertheless, I found her answers to my questions posed via email to be fun to read. I hope you will too. I am very grateful for her taking time out of her busy schedule to have this “conversation” with me.

Melanie Page: A few years ago, I read a piece by Cris Mazza called “Too Much of Moi?” in The Writer’s Chronicle (Vol. 42. No. 2). She had polled numerous small presses, like Jaded Ibis and Chiasmus and found that nearly everyone is writing in first-person today. The article made it seem like first-person is selfish, and unless you have to write in first-person, you shouldn’t. It sort of confirmed my sense that young writers (yes, my generation) are using “I” because they really are writing about themselves, and since I’m on Facebook, I can frequently confirm my suspicions through networking. Of course writers include personal experiences in stories, but stepping into third-person can give a new writer the chance to explore what someone else might have done in a situation that the author really lived. There’s more room to imagine. Second-person POV gives the reader the sense that the character is a stand in for everyone. The only novel I can think of written entirely in second-person is Girl Imagined by Chance by Lance Olsen, and I’m surprised I don’t see it more often. If I’m discussing ideas that are important to me (even if they’re small ideas), I don’t see how I can feel alone—someone else must feel this way, too, and I want him/her to share the ride with me.

RM: “Metal Eye Drifter” seems to be written in conversation with Ted Nugent, whose quote opens the piece.  Why Ted Nugent?  He’s said some very reprehensible things (about women, about immigrants, etc.).  Are you a political person, a political writer? Is this political/facetious writing part of what makes a work distinct from mainstream writing?

“Metal Eye Drifter” has absolutely nothing to do with Uncle Ted’s recent idiotic remarks, nor do I consider myself a political writer. In fact, I was disappointed that Ted Nugent wore a t-shirt that said, “DITCH THE BITCH, TED FOR GOV” when I saw him at a concert in Michigan. Somehow, though, I got over the stupid shirt and was just terribly excited. My love of the hard core rock personas began long ago, way before I even thought about politics. Metal was something you could get excited about because it was so powerful, and it would bring you and your friends together. Never before have I listened to Bob Dylan and thought, “Yeah! I rule!” Being around people who think they’re awesome (and it’s confirmed in the media) is contagious, especially if you feel weak inside. If you notice, my explanation of “Metal Eye Drifter” in the anthology is almost apologetic!

RM: In your brief notes that follow the piece in WORII, you mention your desire/drive to lose all things “wild/misogynistic.” I was taken with the way these two words were attached to one another, as if these two terms are somehow inseparable? What do you think makes wildness connect with misogyny in American culture? Without the album covers where a woman is trussed like a turkey on a platter, etc., do you think Rock-n-Roll would be as powerful?  What is it with those images?

While Ted Nugent is notorious for womanizing (“Wang Dang Sweet Poontang,” anyone?), a lot of metal bands aren’t. My favorite is Metallica, a group that doesn’t use women to promote their image. In fact, their fan base is mostly young men (and now middle-age dudes). When Dave Mustaine was in the group (circa ’81-’83), he confirmed that they didn’t want to write “chicky music” (music to attract women), but to “rule the world.” I suppose I think of wild meaning “irresponsible,” which without a doubt applied (they’re sober now) to Metallica. Rocking at the same time, though, are Van Halen and Motley Crue, groups that are really, seriously looking to get laid. Women are a huge part of the image of those bands; women want to be with them and men want to be them. I tend to have blinders on at times. Don’t care, lalala! Pretending misogyny doesn’t exist isn’t helpful, so it’s completely selfish and I realize that. In fact, I thought about throwing Motley Crue’s biography in the dumpster after reading some of it. As an adult, I can’t stand the high-level of awful treatment that band dishes out to women (who willingly accept it). As an adult, I also think I’m supposed to be responsible (hence wild/mysoginistic lumped together).

RM: The narrator in “Metal Eye Drifter” makes some fantastic and hilarious observations! On heavy metal: “the whole point of which is ruling the planet, fucking, and drinking yourself retarded.” On children: “little meat sacks.” On breeding out of cool: “She isn’t cool anymore. Booster seats, seat belts. Then again, neither are you. Cereal bowls that suction cup to the table.” (This last one is a beautiful juxtaposition of feelings and concrete images.) Here we are, we used to wear leather pants and slither through crowds of sex starved adolescents, and now we’re fucking middle aged or near to it. Or, worse, we missed our opportunity to wear leather pants and slither…etc., and now we are too old to do it and the cigarettes have left lines around our mouths, and leather in our décolletage.  Oh…sorry, forgive my tangent; I’m reading too much into it perhaps?  Will you talk some more about this narrator in “Metal Eye Drifter?” He is male, he is disillusioned, he is suicidal, he is not his father but he is suddenly just like his father somehow—inside an old man, looking out…

Thanks for seeing the humor in it, and I’m glad it struck a nerve with you, too! I wanted this story to make people say things like, “And remember this! And when we did this!” I don’t think you have to be in your 40s or 50s to feel like the narrator feels. When I was in high school, I had a Metallica shirt for every day of the week. Now I’m almost 30, and I feel sad, like I knew who I was then and don’t now. Things change around me and prompt changes in me. My husband and I don’t have kids, but many of those who rocked with me do, and I wonder, “What the hell happened to you people? You used to be cool!” Really, you could read this piece as being about a youth I miss that contained sporadic adventures like leaving on a road trip at 2am, and about watching others “sell out,” in a sense. The narrator in “Metal Eye Drifter” feels so unlike himself that he’s ready to let it all go. Instead, he gets to live in memories.

RM: Can you let me in on your writing process?  How often/how religiously do you write? Do you use any formal exercises to come up with metaphor and images? With this last question, I’m thinking in particular of the opening line in your piece “The Crissy” that appeared in Paper Darts Issue 5:  “Crissy’s hair is more beautiful than baby smiles.” How did that line come to you (do you remember)?

The imagination fairy occasionally feels kind enough to give me weird thoughts like comparing hair to baby smiles. Those honestly come out of nowhere I can locate, and frequently come out of my mouth without permission. It can make for an embarrassing life, though many people call it “cute.” As for my writing process? Imagine you have a crayon about an inch in length. It doesn’t have a wrapper on it. The crayon is your imagination. You use the crayon to color on a single piece of paper. The paper is your story. Since you are a passionate colorer, you press really, really hard! As you knew would happen, the crayon runs out fairly fast. When the crayon is gone, it’s all done. Sometimes the final result is, “Yay! Look at my story!” and sometimes the result is “Fuck, I ran out of crayon!” Crayons are difficult to locate.

RM: Why do you think “Metal Eye Drifter” is included in an anthology of experimental writing?

Possibly because it’s about a man and is nasty toward women, which people think means something when it comes from a woman. Possibly because the narrator gets to hang out in an eyeball.

Thanks so much for giving me this interview, Melanie! I look forward to rockin’ out with you in person one day.