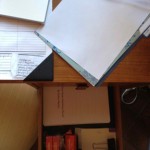 Put your manuscript in a drawer.

Write your next novel. With experience comes …well, experience. Oh, and wisdom.

Did you know that “debut” fiction that we see in the catalogues of the big publishers are rarely the first novel that writer completed? The “debut” success stories in the New York Times often have two or three unpublished novels under their belts. It wasn’t until after they worked out some of the kinks that were hard to put a finger on in their first manuscripts, some of the issues of craft that kept the reader at bay, whether it was working through those uncomfortable autobiographical elements that so often rear their heads in first fiction, handling them so they could be looked at directly or ignored completely, that their work really began to shine. Their experience made them better writers. So much so that sometimes these writers, looking back, don’t even consider their early attempts to ever have been finished.

Case in point: Anthony Marra’s debut novel, A Constellation of Vital Phenomena, being released in April 2013 by Hogarth, is not his first completed novel. His first novel, he told me in an interview last year, was about Ireland. But he hardly recognizes that as something he even finished. He had another novel in there too. Also he completed a collection of short stories (which has also been picked up by Hogarth and will be released next year). He has been working full time at learning the craft of writing, and it has paid off for him in a relationship with a traditional publisher.

#1 mistake, according to Kristen Lamb: Publishing before we’re ready.  She ends on this note: “Sometimes there are reasons we are being rejected and we need to take a hard look and be honest. Self-publishing is suffering a stigma from too many writers publishing before they are ready. If you really want to self-publish, I am here to support you and cheer you all the way, but remember, we have to write better than the traditional authors.”  I love Kristen. She is very wise. And funny.

“The ability of writers to imagine what is not the self… is the test of their power.” ~Toni Morrison

Need another reason to wait until you finish another book before you rush to self publishing? Say you really do have the perfect book already and you self-publish it and you do all the work to self-publish right and you get readers who love your book. It would behoove you to have another book waiting in the queue for them to buy. Readers are extremely brand loyal. This is why series books sell so well. (Though I am not suggesting you should write a series!) If there is time between your first and second book, you will have to find those readers all over again to remind them who you are. Besides the fact that this just makes so much sense when it’s said out loud, this advice is also given by Kristen Lamb in her blog.

So, congratulations on finishing your first novel! If you’ve worked with me or another editor to locate and deal with weak spots, you’ve got an advantage in the market. If your goal is traditional publishing, and if you’re convinced it is the next great American novel, write a query, do a targeted pitch to agents, keep building your relationships with writers and readers, and start to work on your next book.

In a year, you’ll have a lot more to work with than if you spend the next year marketing the hell out of your only book in the self-published marketplace.