Telling rather than showing is a clichéd piece of criticism in writing workshops. But really the advice to “show don’t tell” has to do with many layers of writing, not just with providing more detail as most novice writers mistakenly believe. It is providing the right details at the right moment and about making everything do enough work. It is also about sentence structure and strong dialogue and creating scenes that contain not just words but personalities, and not relying on adverbs and adjectives but selecting just the right verbs and nouns. In other words, attention to the entirety of writing craft.

The imprecise selection of detail can detract the most from a manuscript. It contributes to issues regarding omniscience and character development: What the reader learns about each character, the details the writer chooses to share, must help develop the protagonist. The same is true of the settings: Where the writer may tell the reader that the slipcover is yellow, if that yellow slipcover is not important somehow to creating the scene, developing the fictional dream, then that is the wrong detail. Every detail must be carefully chosen to move a story forward or create tension. It must do double duty regarding painting a scene or creating a character (not just a minor character, but contributing to the roundness of a major one).

Take a look at these two lines, which contain many of the common pitfalls of early drafts:

“So what’s new?”  She asked him, wanting to tell him about her day.

“How about you go first.”  He said, sensing she wanted to talk.

The dialogue is not doing enough work; there are no gestures or visual clues, and the writer is telling the reader rather than showing; the sentence structure is repetitive and the point of view is inconsistent. Note that “wanting to tell him” is internal to her, “sensing” is internal to him. Consider this kind of revision:

Dragging him outside by the wrist, opening her mouth to speak and then quickly closing it, she moved her eyes from his, and tilting her head to the ground, said, “So. What’s new?”

“How about you go first,” he said, as he reached for her arm and bent his neck to look more closely into his friend’s eyes.

This revision (while certainly imperfect) is more sensory and gesture driven, and an improvement on the original. The reader sees (through visual cues) that she wants to talk to him; the reader sees (through visual cues) that he recognizes that she needs to talk first. The reader does not have to be told. The point of view is more subtly his, more limited; the portrait of each character- she as uncertain or withdrawn or troubled, his as empathetic and compassionate, is created through the choice of details.  The rhythm of the lines is less staccato and so creates more feeling and emotion around them.

With each revision, with attention to these things on the level of language and writing craft, we come closer to telling a story that our readers will remember and recommend to their friends. 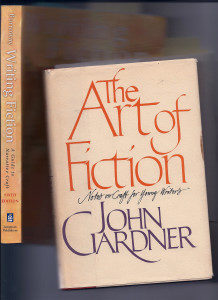 My go to books on craft are John Gardner’s The Art of Fiction and Janet Burroway’s Writing Fiction: A Guide to Narrative Craft, because they provide some of the best explanations of common pitfalls and ways to eliminate them in revision.